BBQ Braised Ribs are tender pork baby back ribs (aka braised short ribs) in pineapple juice and sticky bbq sauce! This pork recipe is slowly baked in the oven for the juiciest bbq ribs! The BEST tender pork ribs with all the classic barbecue flavors!

I have a collection of my favorite braised recipes because it’s a slow hands-off method with most of its work done in the oven or pot! Our favorites are Braised Cabbage and these Braised Potatoes that are always a hit! 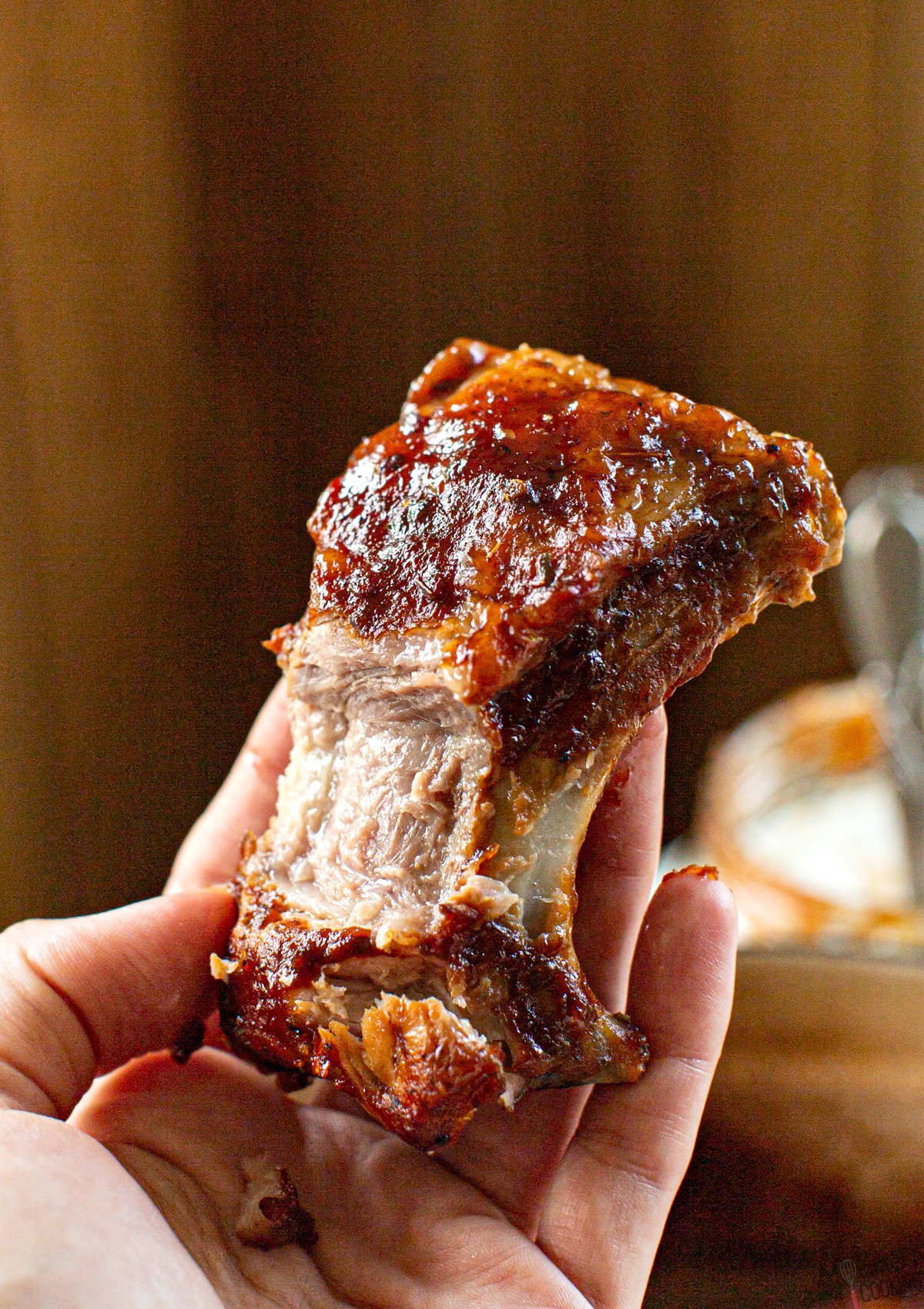 My mom is friends with a woman who caters for weddings and these barbecue ribs happen to be one of her specials! Wait until you get a whiff of these pork ribs baking in the oven! We love them with mashed potatoes or serve with a side of corn or slaw to complete your meat plate!

Braising is one of the most tender ways to cook ribs, and this easy recipe shows you how to get tender meat with ease! My heavy dutch-oven pot never fails to make these ribs so juicy and flavorful! I simply pop the heavy lid on top to trap that steam and liquid in! It makes one of the BEST braised pork ribs in the oven!

These BBQ braised ribs have been my top choice for BBQ rib recipes and were actually one of the recipes I posted back in 2015 when the blog began! They have been around for engagement parties, Sunday’s lunch, and many hosted dinners! I can count on these ribs whenever I want to impress guests and they’ve never turned me down! The house always smells good when these bake in the oven and my cast iron does all the cooking! 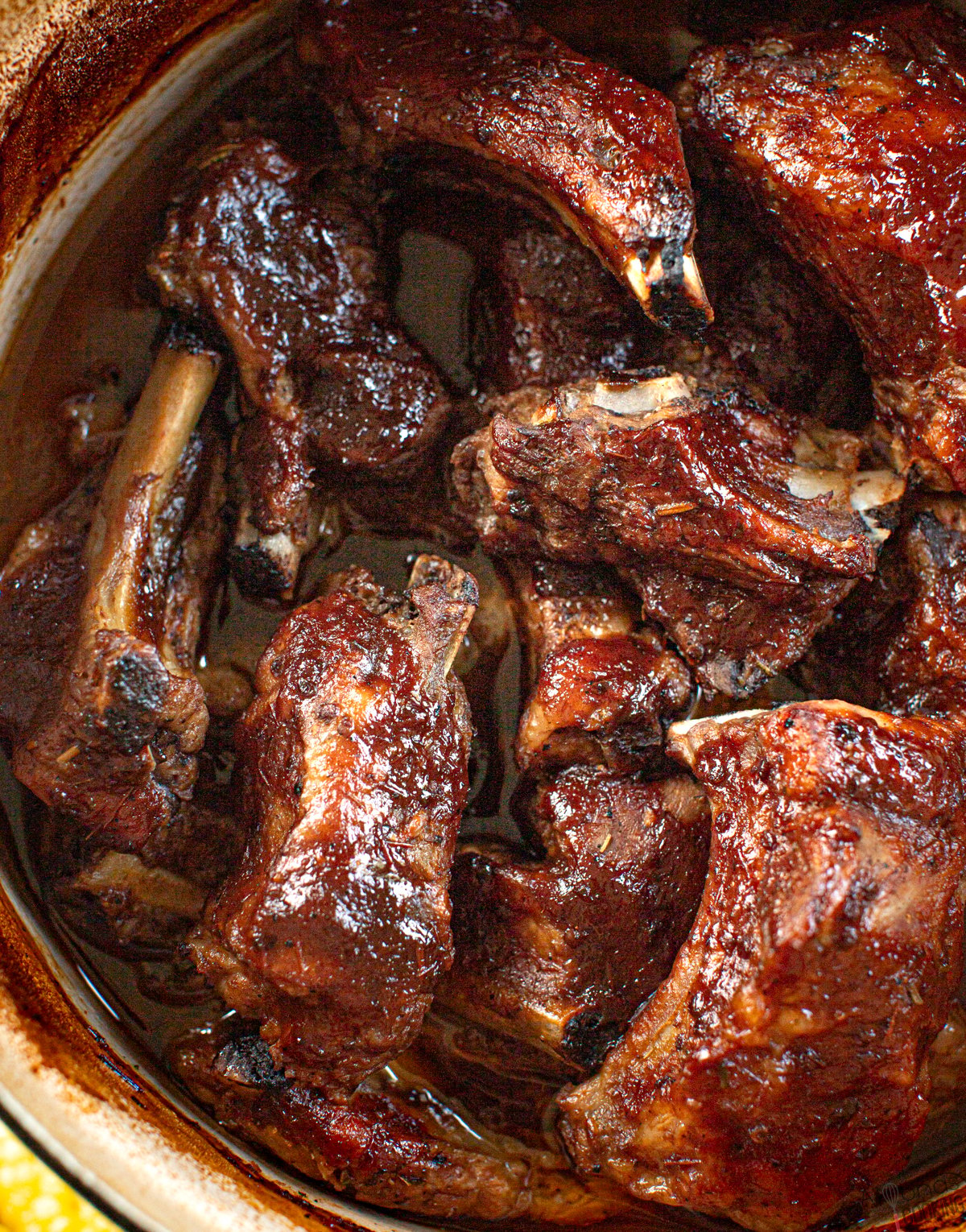 The sauce for these braised ribs is one of kind! Similar to Korean short ribs pineapple juice is the meat tenderizer you’ve been missing out on! You still get all the classic bbq flavors of ribs, only much tender meat!

The seasoning list is short because most of the flavors come from the seasoned barbecue sauce. With the help of the pineapple juice, these pork ribs don’t need many spices or special rubs, and most of all they get so tender! The meat still sticks to the bone for structure.

I know there are many short ribs recipes with beef and wine but these are like your traditional pork BBQ ribs only first braised because not everyone has an instant pot to trap all that moisture in that can make any meat tender. These ribs don’t require any stocks or cooking before the braising. It’s a must-try dish for anyone seeking delicious pork ribs basted in barbecue sauce!

I slice a full rack of ribs into individual slices and this time I cut some into 2-piece chunks too. Once the ribs have braised you baste some bbq sauce over each rib and broil over high to get those sticky finger-licking ribs!

Baby Back Ribs vs Short Ribs

Pork ribs come in two different sizes–spare ribs or baby back ribs. Spare ribs are bigger slices of meat taken from the pork belly and typically way cheaper. Whereas, baby back ribs are much shorter, tender, and taken from around the loin muscle. Either cut of meat is great for braising and have both turned out fork tender and fall-off-the-bone delicious!

How to Braise a Full Rack of Ribs?

To preserve the whole rack of meat take a full rack of baby back ribs and place it into the pot over the sauce. The ribs will look curled. Cover with a lid and braise until tender. Remove the full rack with tongs and place it onto a sheet pan. Baste with barbecue sauce and broil over high until sticky and browned.

What Goes With Braised Ribs?

Short ribs or any rack of BBQ ribs go with these tasty sides:

What Does It Mean To Braise Ribs?

Braising the ribs covered in sauce cooks the meat slowly in its fat and liquid to create a tender rack of meat. Later if you want the ribs browned you’d baste on the barbecue sauce and broil it over high to get sticky finger-licking ribs.

You want to avoid over-baking the ribs as the meat will later be fall-off-the-bone tender, which is fine ladled over a bed of mashed potatoes.

How Long To Braise Ribs?

You don’t want to braise ribs for too long. 6lbs of baby back pork ribs are done in an hour and a half.

When the internal temperature reaches 145°F, the ribs are done. However, that doesn’t always mean tender meat. If you want fall-off-the-bone tender ribs bringing the temperature up to 190°F or more can melt the fat and collagens, which means tender! This can take anywhere from 1 1/2 hours to 2 hours + when using an oven. Other cooking appliances will differ in cooking times as a pressure cooker makes tender meat in a fraction of the time!

How To Remove the Membrane off Ribs?

Removing the filmy membrane on ribs is optional and if baking long enough it should get tender.

Typically the membrane cooks down when braised but if it is bothersome just peel it off before placing the ribs into the dutch-oven pot.

How To Braise BBQ Ribs: 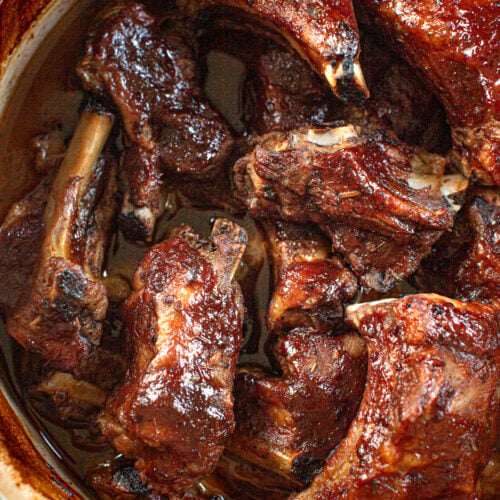 How to cook bbq ribs: 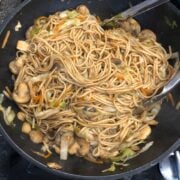 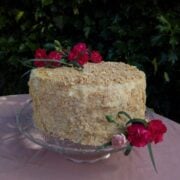