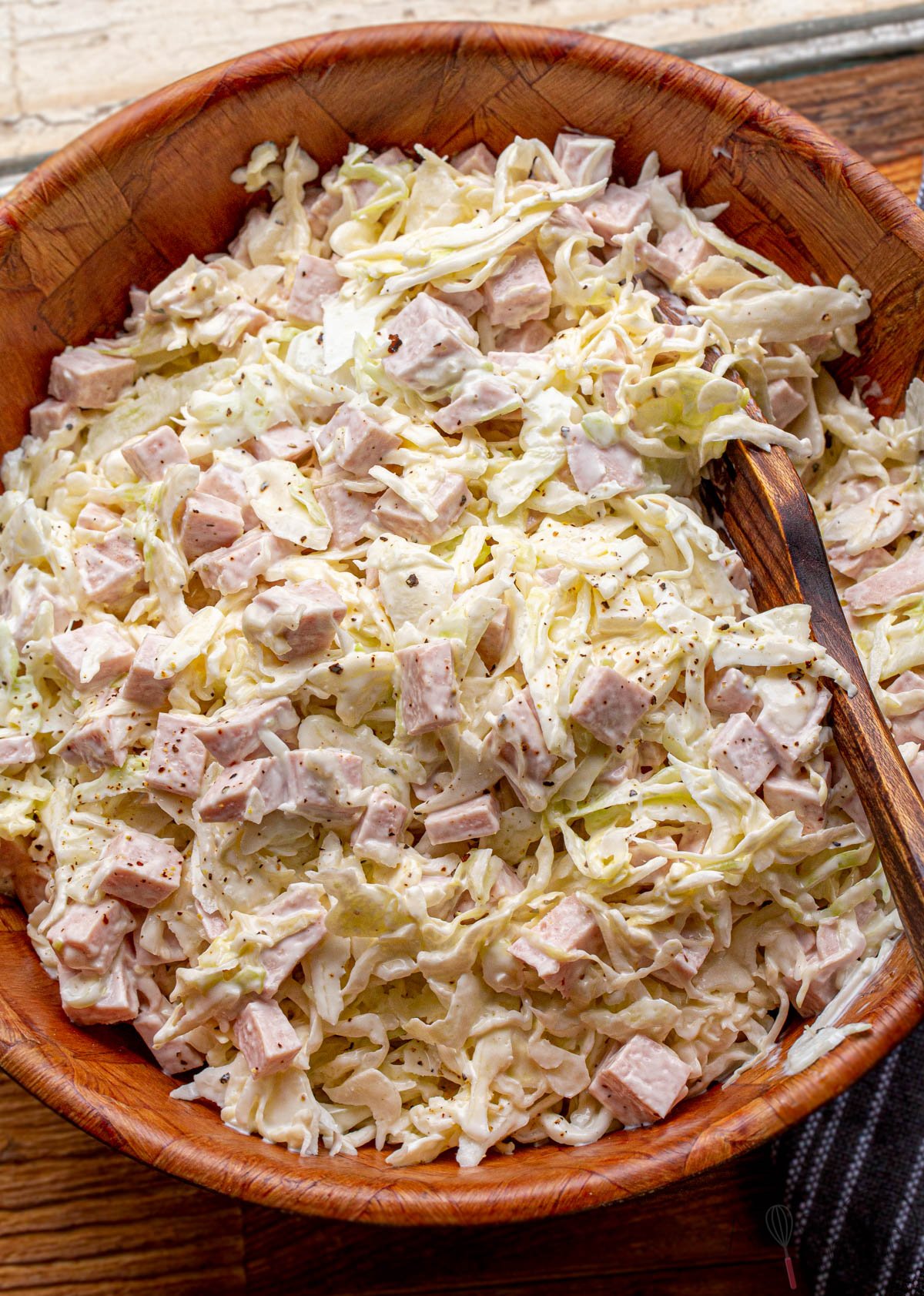 Bologna cabbage salad is a creamy cabbage salad my Ukrainian mother-in-law makes as a side dish. Although Roasted Potato Wedges and Pork Patties are great European main dish dinners, this cabbage salad can still be served to American or Russian dishes! I found this salad was devoured and loved by many when I had served it with grilled chicken on a warm fall day.

The mayonnaise works as an easy tart and creamy dressing that slightly wilts the cabbage the longer it sits (which is still a delicious next-day salad similar to coleslaw!) And if salads need to be short and fast use pre-shredded cabbage in a bag from the grocery store and toss it with the dressing before serving.

Bologna meat is cheap and a great way to add meat to cabbage for a heartier side. I’ve had a friend who used diced hot dogs for bologna in my Olivye Salad (potato salad with bologna) so you don’t have to run to a Russian Supermarket to find bologna.

Furthermore, any kielbasa, ham, or ring of meat would work great for this cabbage salad. It’s a cabbage salad recipe that differs from the vinegar-based ones and is so simple to make! You literally add mayo to the cabbage shreds and toss with bologna pieces and salt and pepper. You’d be surprised how delicious a cabbage salad could be from such simple ingredients! This would make a great salad recipe throughout winter or summer since cabbage is available year-round! 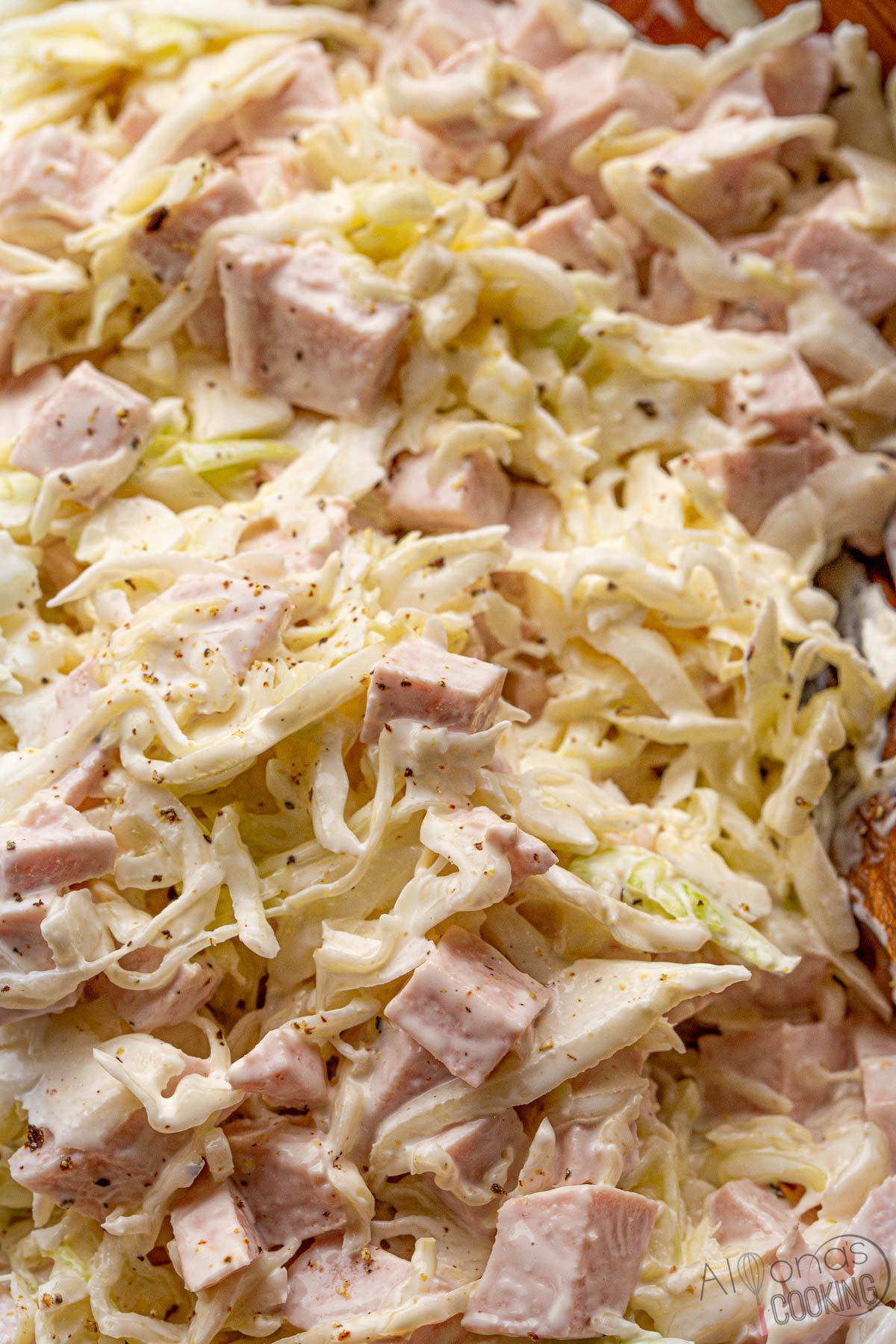 Is Cabbage Good For You?

The health benefits of cabbage are many! Cabbage is one of the most frugal vegetables and is an annual vegetable crop to grow! It can be pickled, fermented, braised (sauteed), and eaten raw. Cabbage is also rich in dietary fiber, Vitamin C, and K! It’s no wonder the Chinese cuisine ranks at 48% for world production in cabbage!

The cabbage plant is from the Brassica oleracea family of plant species. There are three main cultivar groups the cabbage is recognized in; white cabbage, red cabbage, and savoy cabbage with white cabbage being hard and firm. Savoy on the other hand is a crinkled-leaf cabbage that is softer.

This cabbage salad recipe requires super simple ingredients that go with anything from Baked Fish to Grilled Chicken Kabobs and tasty Potato mains! 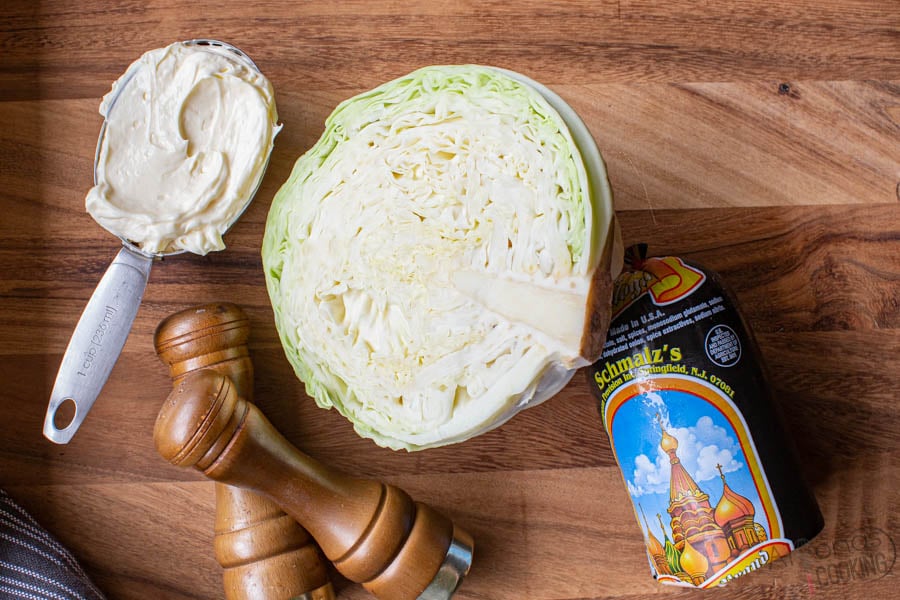 How To Make Bologna Cabbage Salad?

Cabbage salad can be eaten raw and is great fresh. If you have any leftovers they can be eaten the next day. Keep salad refrigerated and covered when storing in the fridge. To make the salad ahead of time, finely shred the cabbage and keep sealed in an airtight bag until needed. Toss with the dressing and bologna before serving, along with the salt and pepper.

What To Serve With Creamy Bologna Cabbage Salad?

A cabbage salad is mild enough to go with almost any main or cuisine! Here are some ideas in what to serve a creamy cabbage salad with!

Tips To Make A Cabbage Salad: 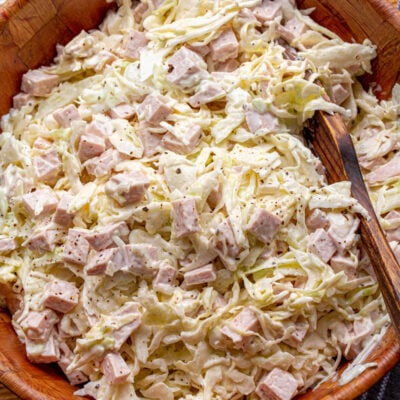 Prep Time: 10 minutes
Total Time: 10 minutes
Servings: 12 servings
Author: Alyona Demyanchuk
Bologna Cabbage Salad is a simple side dish made with diced bologna meat, shredded cabbage, and mayo. Out of all the cabbage salad recipes, this one is delicious, fast, and easy to make!  Cut up luncheon ham or kielbasa for an everyday standby salad! 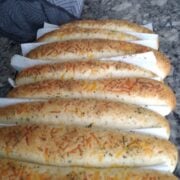 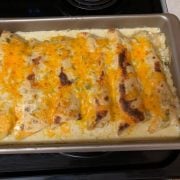