This Chick Fil A Chicken Sandwich is like the real thing! A thick fillet of crispy chicken breast over a toasted butter bun and dill pickles tastes like the Chick Fil A recipe! Use this chicken breading for nuggets, strips, or tenders and make Chick Fil A Sauce to complete your meal! 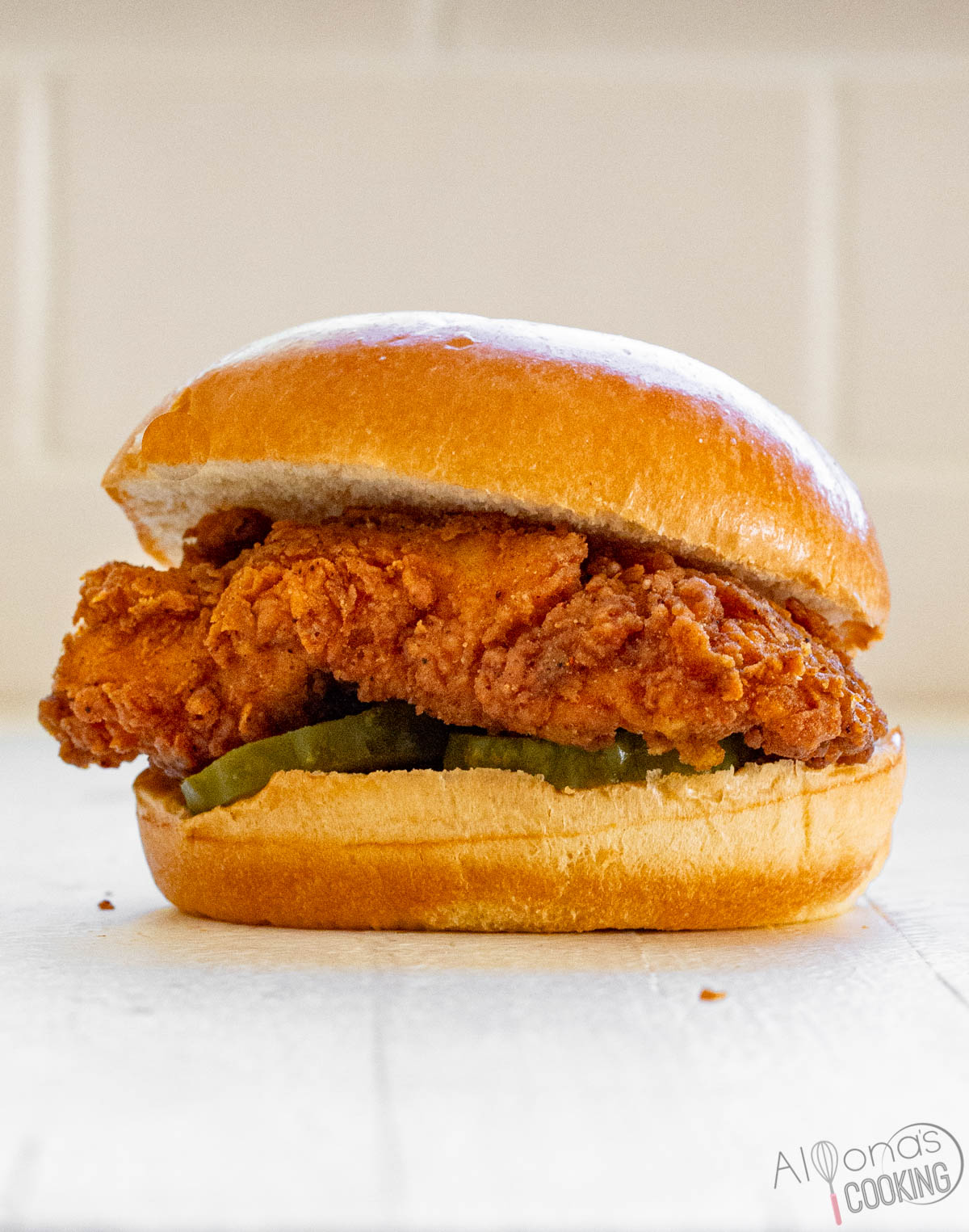 So, how do you make a Chick Fil A Chicken Sandwich? Rumor has it the seasoned chicken is brined in dill pickle juice. In fact if you think you smell a distinct pickle flavor it’s because the dill pickles are right on the bottom of the fried chicken fillet.

The original Chick-fil-A Chicken Sandwich is made with boneless and seasoned chicken breast fillets that are hand breaded in every restaurant. To begin, you’ll want to flatten the filet to cook more evenly and when you cut the chicken breasts in half lengthwise, make sure its big enough to cover the bun or biscuit.

Next, the marinated chicken fillets then get dipped into a milk wash (eggs and milk) and then the filets get dredged into the seasoned flour of which you dip, shake, flip, and take to the pressure fryer to cook. For a full video tutorial watch How To Make The Chick Fil A Chicken Sandwich right from the restaurant itself!

Before we jump in, I want to say this recipe was specifically designed to Copycat Chick Fil A Sandwich! It is not a typical fried chicken recipe that is marinated in buttermilk and hot sauce like Southern fried chicken.

I literally taste tested it with the real sandwich right by my side and with plenty of Chick Fil A video tutorials I was able to recreate the sandwich just how its made at the restaurant, (lets just say a lot of testing was involved.) Leave a comment below to rate and review my recreation!

Popeyes Chicken vs Chick Fil A

The Popeyes chicken has a distinct white pepper flavor in their breading. Chick Fil A on the other hand has more of a tart (ground mustard) and sweeter chicken fillet. Both are delicious in their own way!

However, each is made differently. I’ve also noticed that Popeyes chicken is lighter in color whereas Chick Fil A fillets are much darker. This is because the red spices (paprika) are given more in the Chick Fil A breading.

Another difference to mention in making these fried chicken recipes is that the egg wash from Popeyes is much thicker than the milk wash from Chick Fil A. This will make a huge difference in how much the flour adheres to the chicken!

What To Serve With Fried Chicken Sandwich:

Fried chicken sandwiches go best with a side of potatoes like waffle fries, potato chips, Cajun Fries, or homestyle French Fries! Make sure to make this Homemade Chick Fil A Sauce!

P.S. Did you a Chick Fil A Sandwich meal is $7.29! Can you imagine the price of a platter to feed a whole family? Well, it’s around $60 dollars to feed our family at Chick Fil A, but if you can buy a value pack of chicken breasts and hamburger buns your total to cater a family can be around $15! Now that’s lunch on a budget!

What Is The Chick Fil A Chicken Sandwich?

I want to inform you that the Chick Fil A Menu serves a collection of dipping sauces and dressings. The sauce closest to the Chick Fil A Sauce is the Chick Fil A Honey Roasted BBQ Sauce. Don’t get confused with these two sauces, they are very similar.

The Honey Roasted BBQ Sauce is smokier and has more notes of BBQ sauce. It was specifically designed for the Grilled Chicken Sandwich (off their menu) and the Chick-Fil-A Sauce has more notes of honey mustard and mayo and is slightly lighter in color.

Both Dipping sauces are sweet, smokey, tangy, and equally delicious.

My interpretation of the ingredients above? Use spice blends to shorten the list and home alternatives that will work the same. Here is my grilled chicken marinade:

How To Make Fried Chicken Sandwich Like Chick Fil A?

Can I Use Chicken Thighs?

Chicken thighs will work great for this fried chicken sandwich! Leave the thighs whole and do not slice in half like you would a chicken breast fillet.

If you want to know how to reheat Chick Fil A Sandwich, its to microwave it or wrap it up in foil and bake. These reheating instructions are for assembled and prepared sandwiches. If you are working with a filet you’ll want to revive it in the oven uncovered until the breading crisps up again, then assemble into sandwiches.

An air fryer would do a great job at reheating the filets too! Keep leftovers refrigerated for up to 4 days. Be sure to pat dry your pickles before placing into the buns, this way the bread won’t get as soggy.

How Long To Fry Chicken?

Wondering how to fry chicken breast for a Sandwich? The best fried chicken sandwich comes together with the right equipment. Colonel Sanders of KFC fried his chicken in a pressure fryer like Chick Fil A. Apparently it makes juicy fried chicken, however the way you marinade chicken will determine the juiciness too.

You don’t need a Pressure fryer or any fryer in that matter, just a deep pot to hold the frying oil and enough room to submerge the chicken cutlets into.

Chicken Breast cutlets take anywhere from 4-5 minutes or around 3 on each side. The thicker the fillet the longer it will take to cook. It is important to cut the chicken breasts in half lengthwise for even cooking.

Your chicken is done when the meat thermometer reads 165°F.

Who owns Chick fil A? Chick Fil A was founded in 1946 in the Atlanta suburb of Hapeville, by Truett Cathy. The first diner was called Dwarf Grill and later in 1967, Cathy founded and opened the first Chick-fil-A restaurant in Atlanta’s Greenbriar Shopping Center.

Today, it’s one of the best selling fried chicken restaurants that is operated by his son and grandson who are the CEO of the company.

How Many Calories In A Chick Fil A Sandwich?

How To Make Chick Fil A Sandwich: 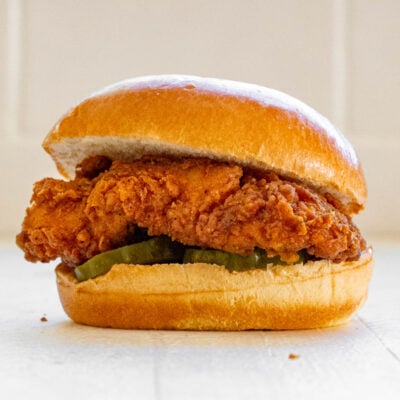 Prep Time: 10 minutes
Cook Time: 20 minutes
Marinade: 20 minutes
Total Time: 50 minutes
Servings: 10 Sandwiches
Author: Alyona Demyanchuk
This Chick Fil A Chicken Sandwich is like the real thing! A thick fillet of crispy chicken breast over a toasted butter bun and dill pickles tastes like the Chick Fil A recipe! Use this chicken breading for nuggets, strips, or tenders and make Chick Fil A Sauce to complete your meal!