Get ready to eat The BEST Mushroom soup! This recipe is highly-rated, by family and friends, and even kids-approve! All the mushrooms are sauteed with carrots, onion, cream cheese, and sour cream before being added to a pot of simmering potatoes! Garnish with fresh dill and are you in for a seriously delicious soup! 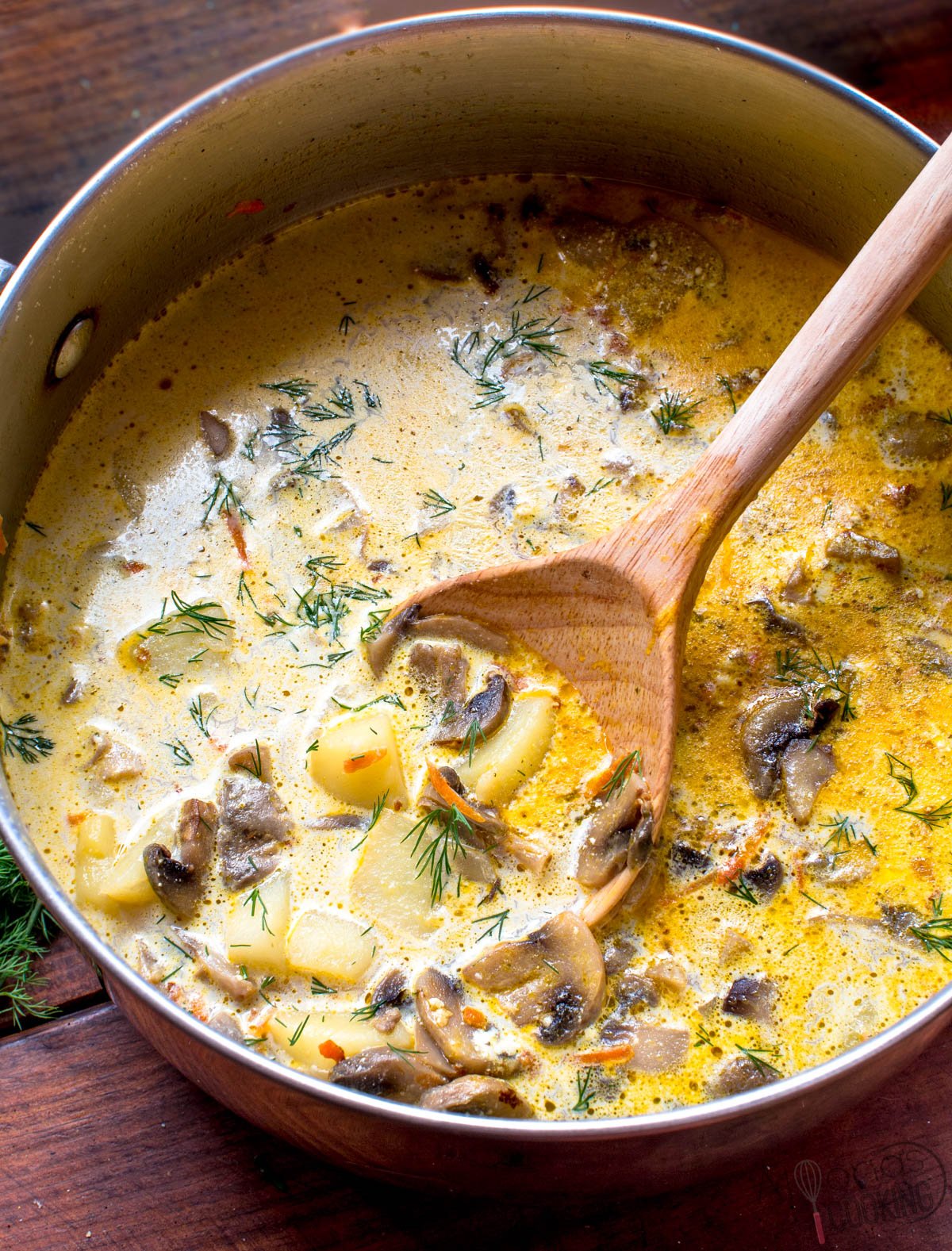 For a flavorful cream of mushroom soup recipe, to ladle over noodles or casseroles make this Russian Mushroom Gravy or the Best Homemade Mushroom Gravy that are made from a roux and thick even to pour. True Story: I had brought mushroom gravy as a side for a potluck one time and someone commented it was a delicious soup!

This is the only Mushroom Soup recipe I’ll make for my family to enjoy warm with a side of bread. Keep in mind this is not your canned condensed soup here, I’m talking fresh homemade ingredients that are made from easily available grocery-store mushrooms. 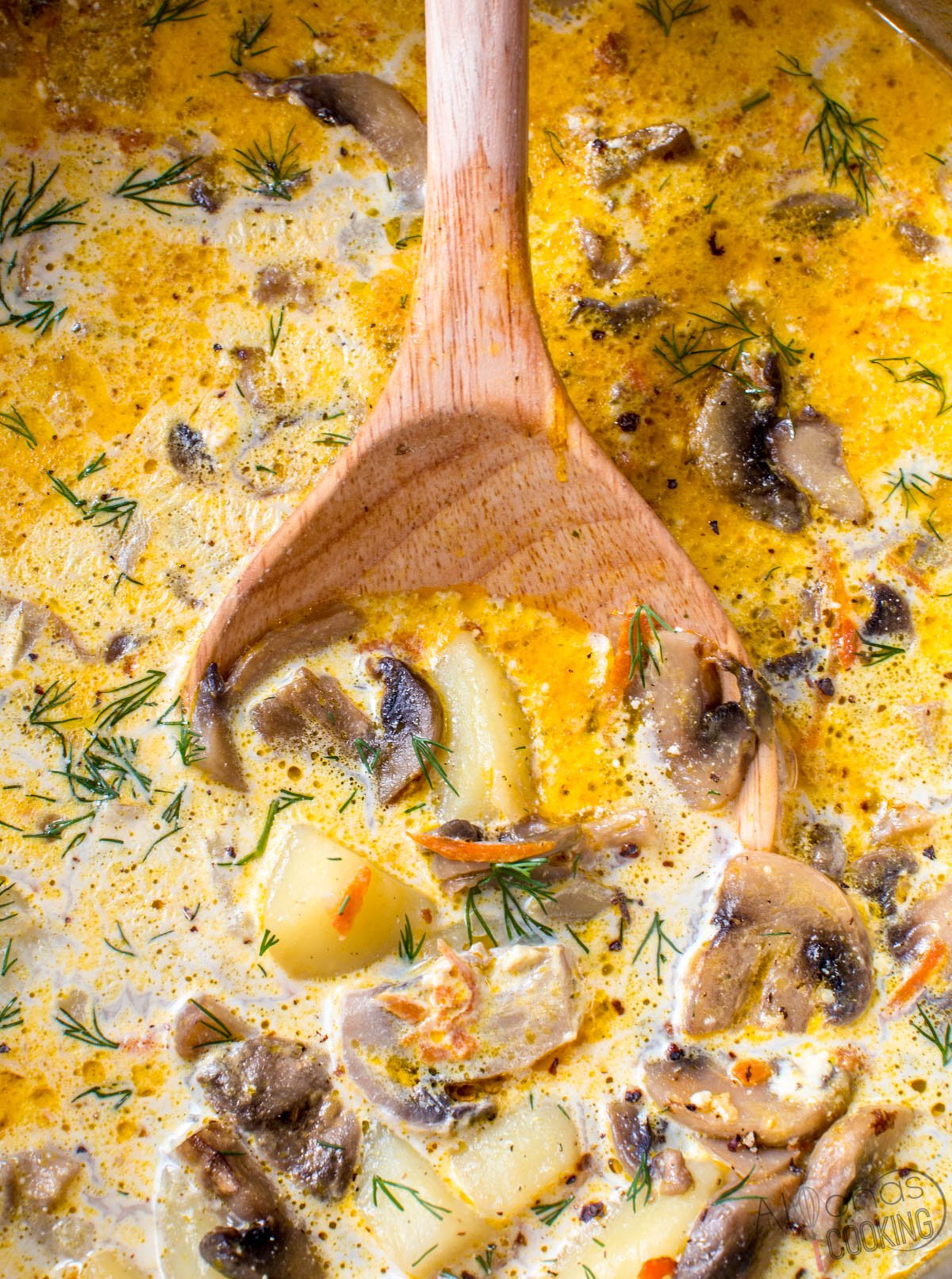 That doesn’t mean I won’t ever make a creamy mushroom soup recipe! In fact, I still want to publish a Campbell’s canned cream of mushroom copycat one of these days, but in the meantime, this is a total winner when it comes to quick and easy soup to put on the dinner table.

I love how easy it is to cook this pot of soup–there’s no need for exotic herbs or wild mushrooms! And if mushroom picking is your thing you can easily use chanterelles, porcini, or shitake mushrooms.

Matter of fact, in the Ukrainian culture, chanterelles are big with picking and drying, but, being a busy mom easily available cremini mushrooms like Bella, or white button mushrooms work great. And if those work, imagine how the pungent earthly ones would taste like in this soup? Even more aromatic! 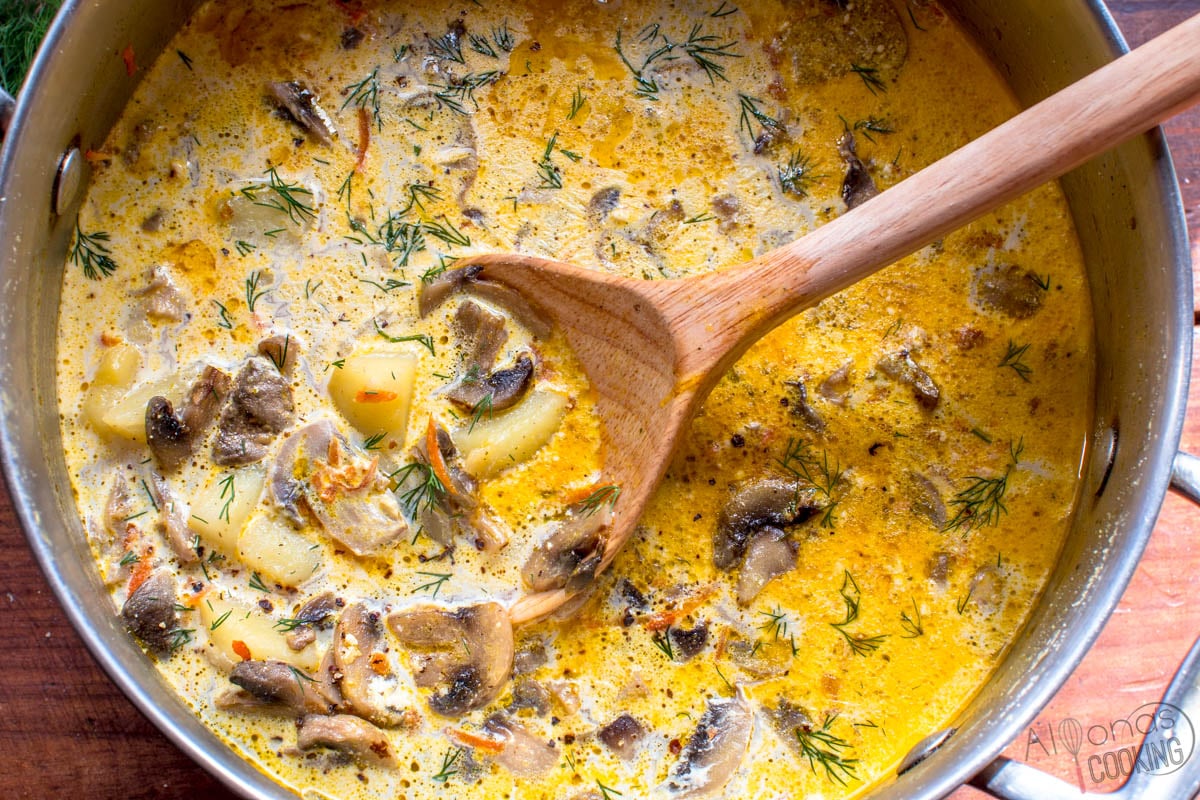 Furthermore, this soup is done in under 30 minutes! I think everybody should have a mushroom recipe they can easily make and this one exceeds them all. Believe me, I’ve made the Hungarian mushroom soup, back when All Recipes published it years ago, and this mushroom soup is way better!

This Ukrainian mushroom soup recipe is made with a Slavic twist. It is rooted back to my-mother-in law who originally gave me the recipe. Ukrainians love dill, sour cream, and almost anything cheese! 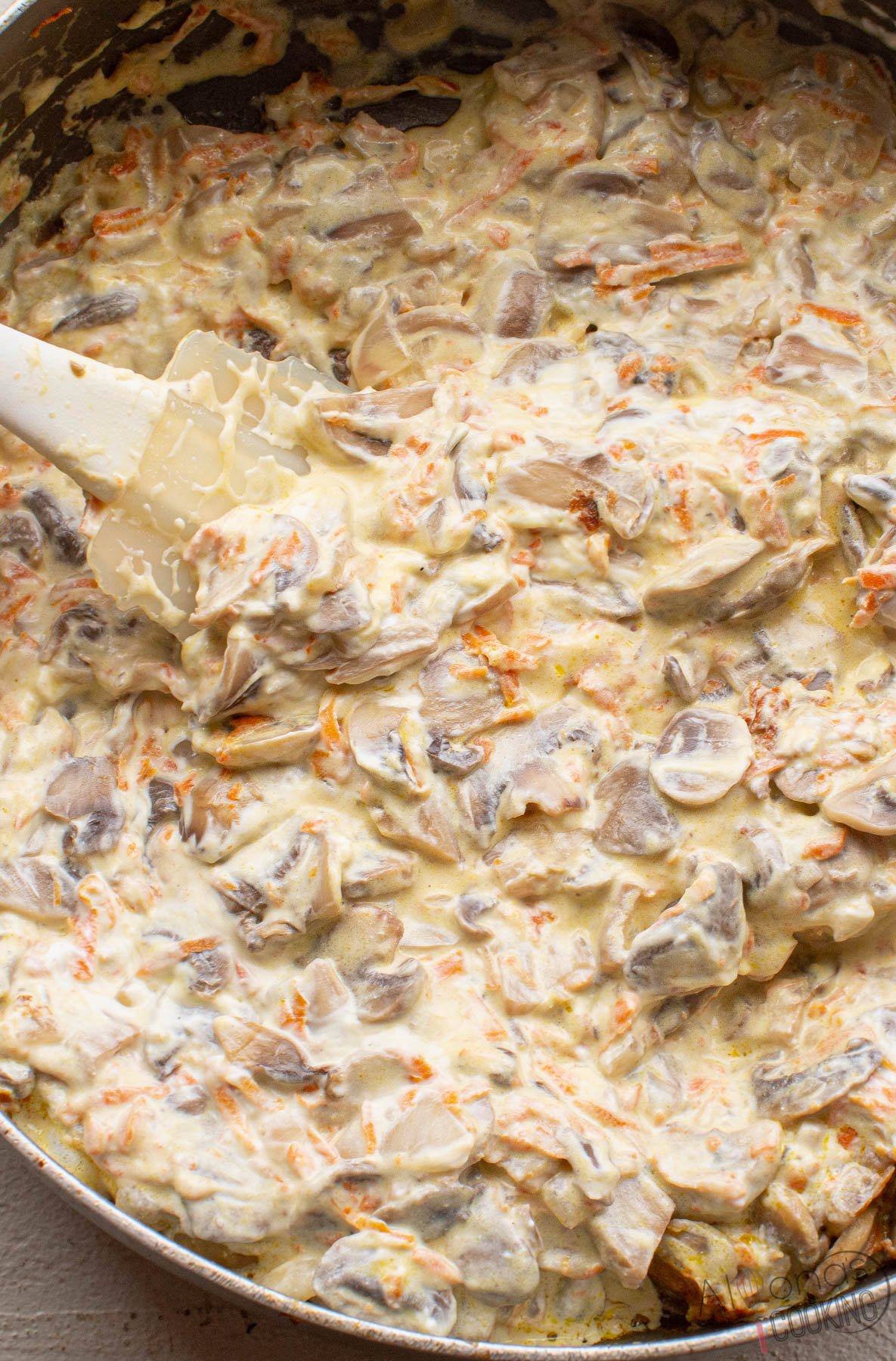 Furthermore, if there’s cream cheese in the fridge–well add it in, to make things creamy and more delicious! As a result, we love our buckwheat too, which, by the way, you can easily transform into a mushroom barley soup for extra protein, just throw a handful in with the potatoes!

What makes this soup incredible? It’s a super flavorful gluten-free soup made easy! Fun fact: Ukrainians make a Cream of Mushroom soup called Yushka which is thickened with flour, similar to the American Canned soups but from Chanterelle mushrooms.

My mom makes this soup with ground pork, but it’s so good in plain vegetarian form or with chicken pieces, and if you have leftover beef from grilled steaks or stroganoff just add them in. Combine all the ingredients and get a crusty baguette out, it’s time for a comforting soup on this cold fall day! If you try this mushroom soup leave a comment below! I love to hear from my readers we could use helpful tips and ideas!

What Is Mushroom Soup?

There are two ways to make mushroom soup– Cream Of Mushroom soup and regular mushroom soup. Cream of Mushroom is typically a condensed creamy soup much thicker in consistency and made with a thickener like cornstarch or flour. It’s best used in casserole recipes and comes in different flavors like mushrooms, celery, or cream of chicken.

Homemade mushrooms soups are similarly the same, although much more flavorful depending on the kind of mushrooms used. Some recipes call for less flour than others are much thinner than the canned soups.

This Mushroom soup is made without a roux and way tastier than any condensed cream of mushroom soup from a can! It’s a mushroom soup recipe made of basic ingredients like carrot, onion, and button mushrooms then simmered in a chicken and mushroom broth with cream cheese, heavy cream, and sour cream.

Is Cream Of Mushroom Soup Gluten-Free?

Most Cream of Mushroom Soup recipes, do contain flour when making the roux. However, this recipe is totally gluten-free, just be sure to check the ingredient list of your bottle of spices to ensure it’s gluten-free.

I still use creamy cream cheese and sour cream for this soup only minus the flour or cornstarch.

This mushroom soup is made without a roux or slurry, which makes it on the thinner side. It has heavy whipping cream and a block of creamy cream cheese that thins out when added to the broth. For a thicker mushroom soup, you will want to use flour or cornstarch as a thickener. Since this recipe is the opposite of homemade cream of mushroom soup, it is not nearly as thick.

How To Make Mushroom Soup?

This cream-infused mushroom soup from scratch is full of flavor making it far more flavorful than any canned soup! Fresh dill is a Ukrainian staple herb used throughout our cuisine. For a full-flavored soup add fresh garlic or parsley! To make a golden mushroom soup use paprika or cayenne pepper for a gold hue.

I love that it’s cooked with easy-to-find ingredients and many are probably in your kitchen now. It’s easy to make and is loaded with potatoes, carrots, onion, and button mushrooms making it an incredible vegetarian mushroom soup, not vegan! Here’s how to make this satisfying bowl of goodness;

Tip: To make a golden mushroom soup use paprika or cayenne pepper for a gold hue. Also straining the mushroom juices when they release during cooking makes for homemade mushroom broth, simply strain right into the pot of potatoes when juices have been released.

Can I Make This Dairy-Free?

This is not a vegan mushroom soup. Since it’s loaded with dairy products like cream cheese, sour cream, and heavy cream, I cannot recommend any alternatives because that’s what gives this soup so much flavor. 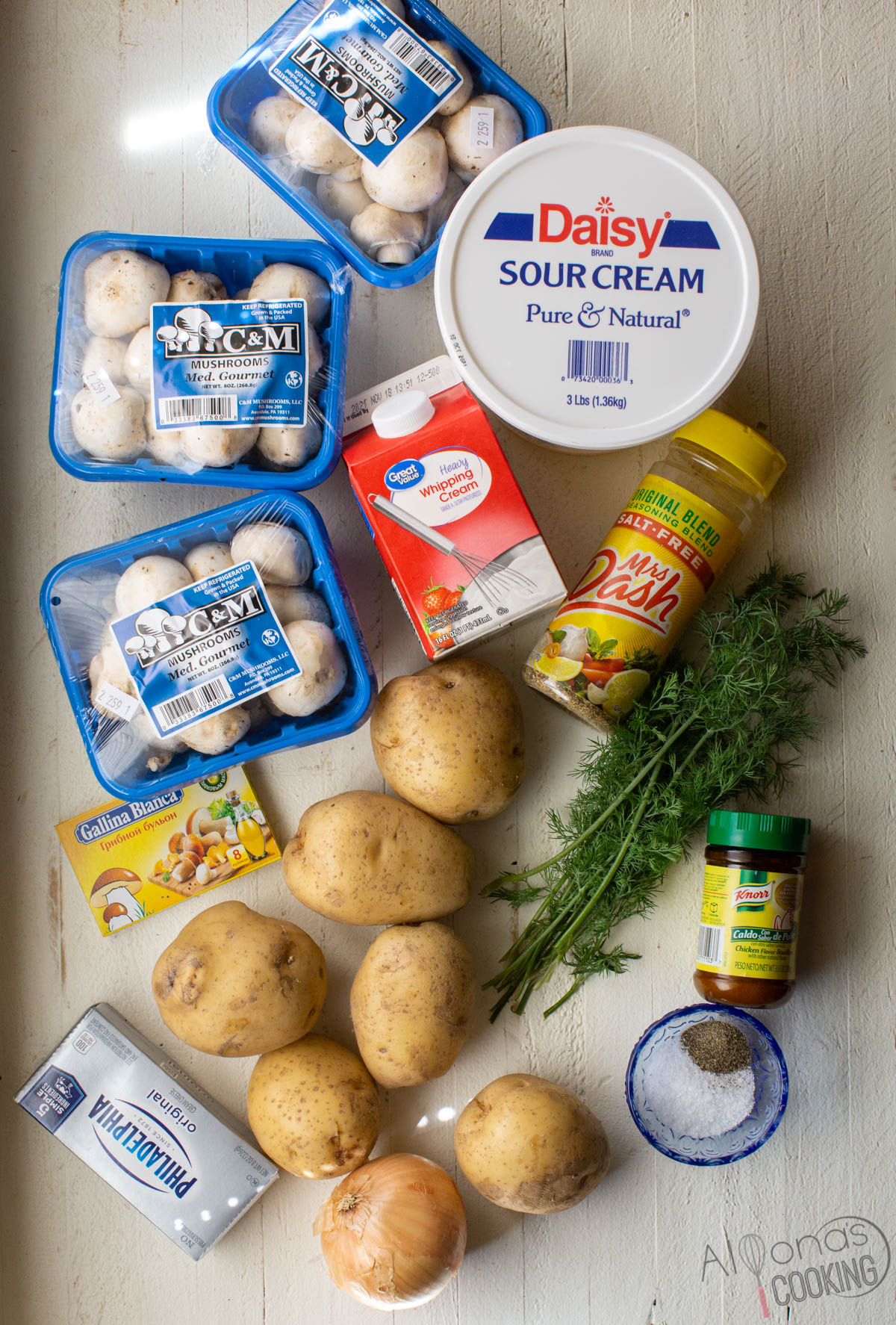 I love how simple and easy this soup comes together! The only complicated ingredient is the mushroom bouillon cubes, however, they are easily available online and found in most Russian or Polish supermarkets. Also, feel free to use part chicken broth for the water and omit the chicken bouillon.

Note: if you cannot find mushroom bouillon cubes, make your own! Simply strain the juice from your mushrooms when they fry. That’s your homemade mushroom broth; add it to the simmering pot of potatoes.

This mushroom soup yields about a gallon of soup. Use a 5-quart pot or anything that will accommodate that much liquid.

How To Store Mushroom Soup?

Leftovers can keep in the fridge for up to 4 days. Anything longer should be frozen.

To Reheat: simply revive the soup by reheating it in a stockpot. Or you can microwave until hot.

Can you Freeze Mushroom Soup?

I’ve had successful results with freezing cream of mushroom soup or most gravy recipes in general. Mushrooms freeze well if they will be repurposed for stews, stir-fry, or soups.

Can I Make It In The Crock-Pot?

Mushroom soup would make a great slow-cooker soup for a busy weeknight dinner. Simply pour the water into the crockpot with the potatoes and spices then cook over high for 4-6 hours or until potatoes are almost done.

An hour before the soup is done, saute the grated carrots and onion in oil. Melt in the cream cheese and sour cream, then toss into the crockpot and heat thoroughly (1 hour.)

The Best Mushrooms For Mushroom Soup?

This soup is loaded with a ton of flavor so there’s no need to go out of your way for porcini, or shitake mushrooms.

The best and most available mushrooms are cremini mushrooms like Bella or white button mushrooms. They are cheap and work fantastic!

Pack extra protein and nutrition, into your soup by adding protein like meats, grains, or green vegetables. Soups are a great way to clean out the fridge! Here are some ideas but don’t go too overboard!

Soups go best with a hearty loaf of bread or crackers. If you need more sides here are some ideas to serve a mushroom soup;

Is This Soup Thick?

This soup is perfect to clean out your stomach and isn’t as thick or creamy as store canned cream soups.

Can I Add Chicken?

Absolutely! Soups are a great way to use up leftover meats or veggies! And if you want to fry up some chicken thighs or chicken breast pieces that works fine too! 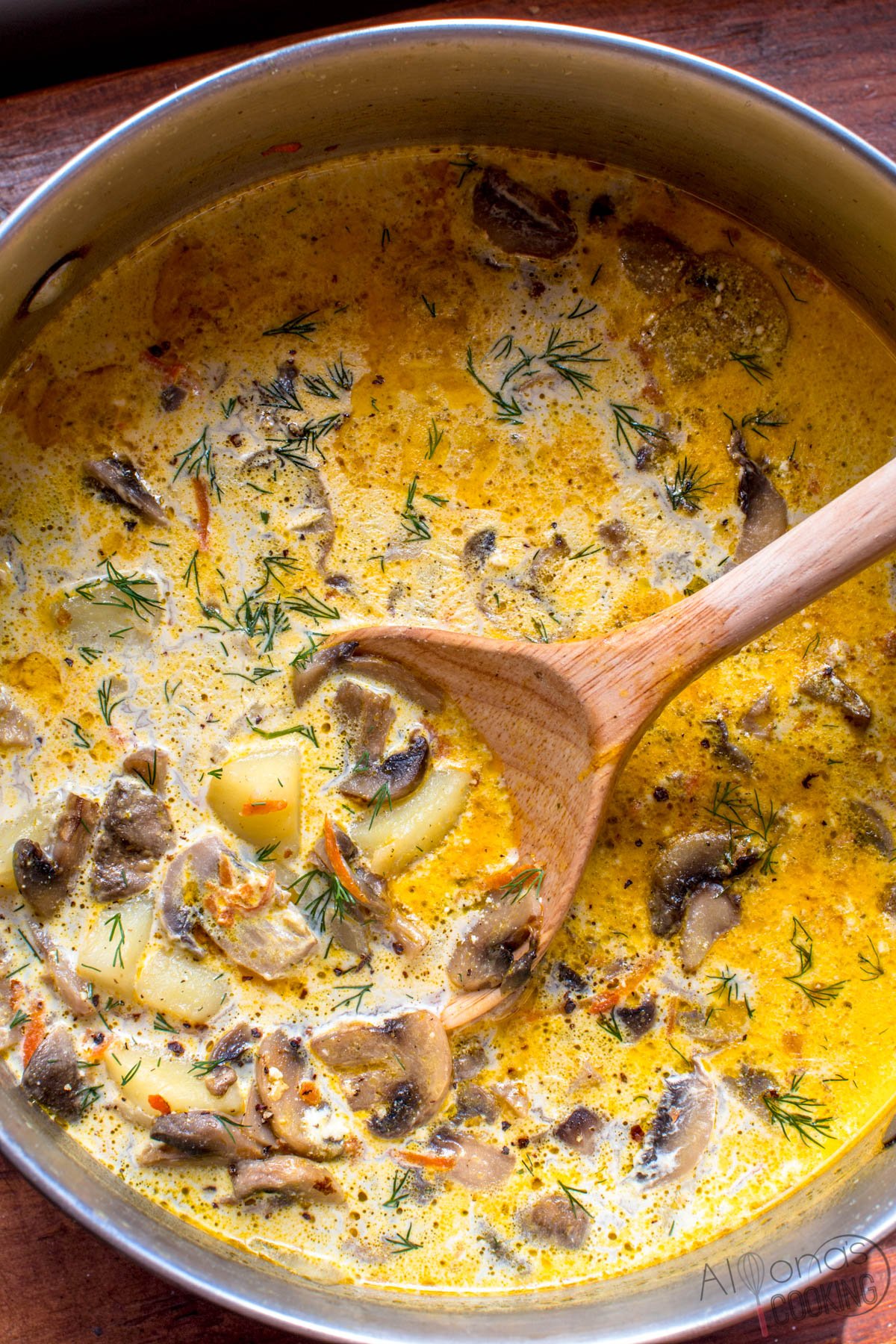 If you’ve made this recipe be sure to comment and rate it below. We love to see you make our recipes.

How To Make Mushroom Soup: 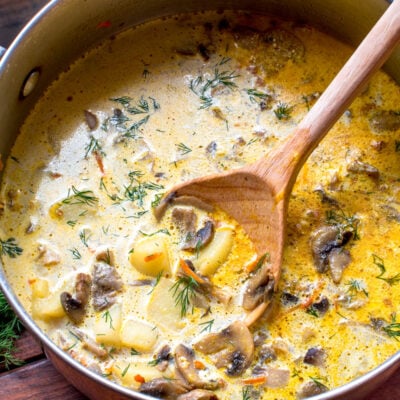 Prep Time: 5 minutes
Cook Time: 25 minutes
Total Time: 30 minutes
Servings: 12 servings
Author: Alyona Demyanchuk
Get ready to eat The BEST Mushroom soup! This recipe is highly-rated, by family and friends, and even kids-approve! All the mushrooms are sauteed with carrots, onion, cream cheese, and sour cream before being added to a pot of simmering potatoes! Garnish with fresh dill and are you in for a seriously delicious soup! (Dinner in under 30-minutes!) 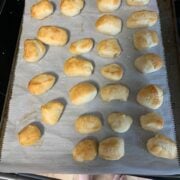 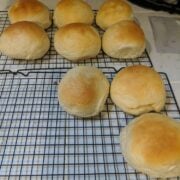 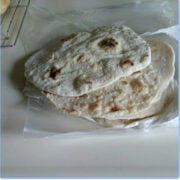 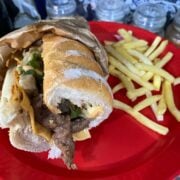