This Raspberry Cheesecake is a lusciously creamy dessert nestled in a homemade oreo chocolate crust and marbled with raspberry swirls then garnished with white chocolate shavings!  A raspberry cheesecake at it’s finest and one that looks like a Cheesecake Factory dessert (aka White Chocolate Raspberry Truffle Cheesecake!) 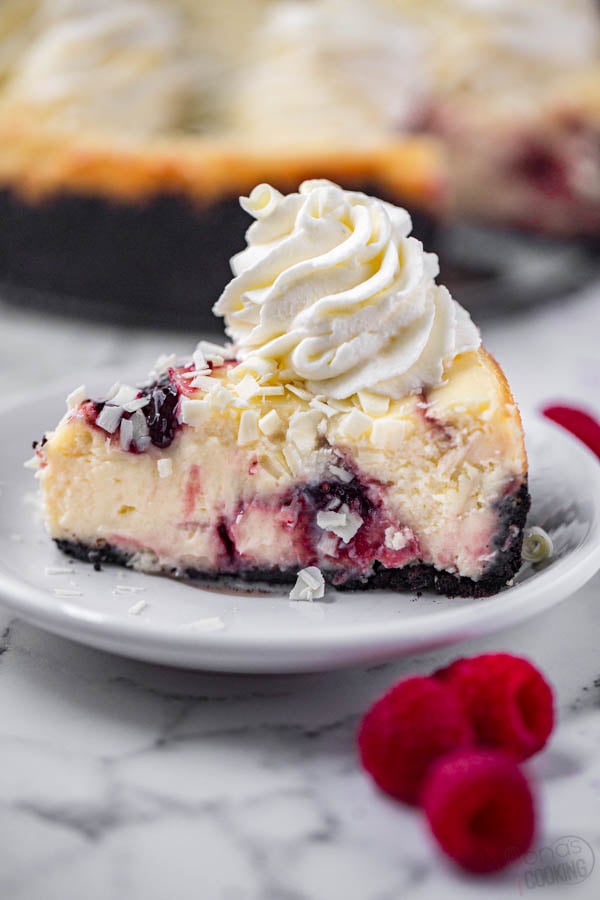 I don’t know about you, but raspberries and white chocolate sound so appealing to me! What’s better than combining those two ingredients to make a luscious velvety cheesecake dessert? The chocolate Oreo crust is crisp and the raspberry filling is perfectly set and tart! A combination to satisfy the raspberry and cheesecake cravings for sure! 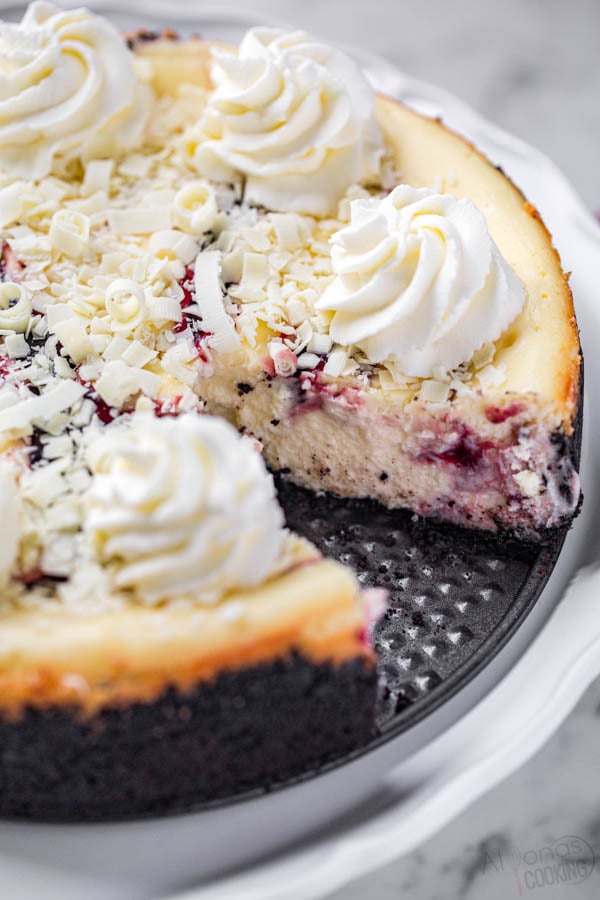 This recipe is incredibly easy and simple! And if you’re looking to impress friends and family with a delicious dessert this recipe is definitely highly rated! It makes the perfect cheesecake dessert with the best chocolate oreo crust and an ultra-creamy middle! Swap it out for a graham cracker crust if you wish, and a raspberry pie filling will work just as good as raspberry jam! Make this for your next gathering or bring it to a tea party, your friends will be drawn by the beauty of this raspberry cheesecake! 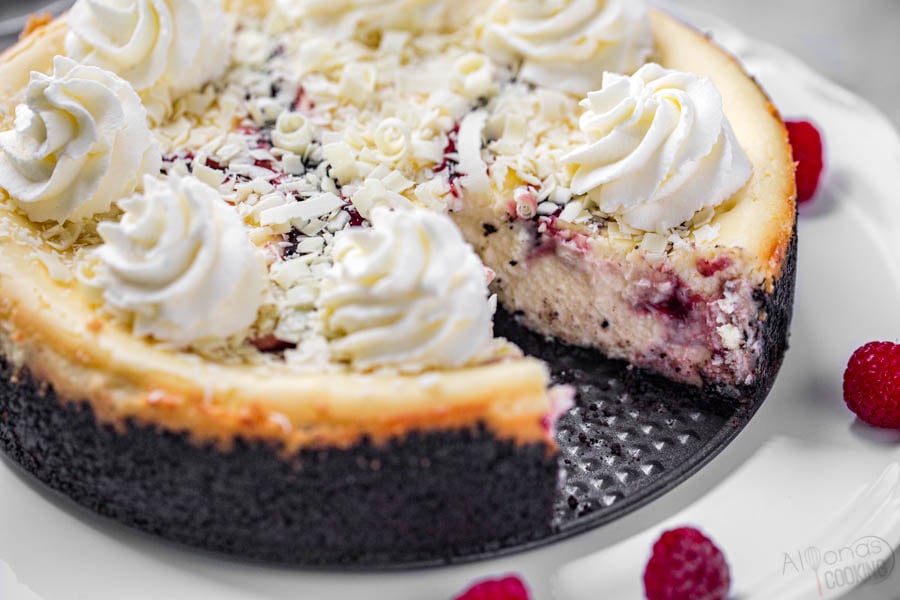 How to Make a Raspberry Cheesecake with Swirls: 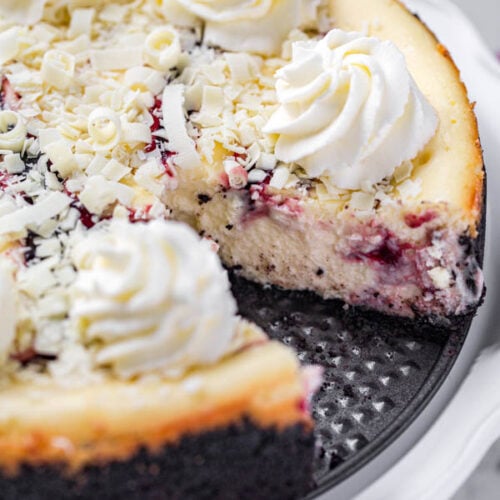 How to make a Raspberry Swirl Cheesecake: 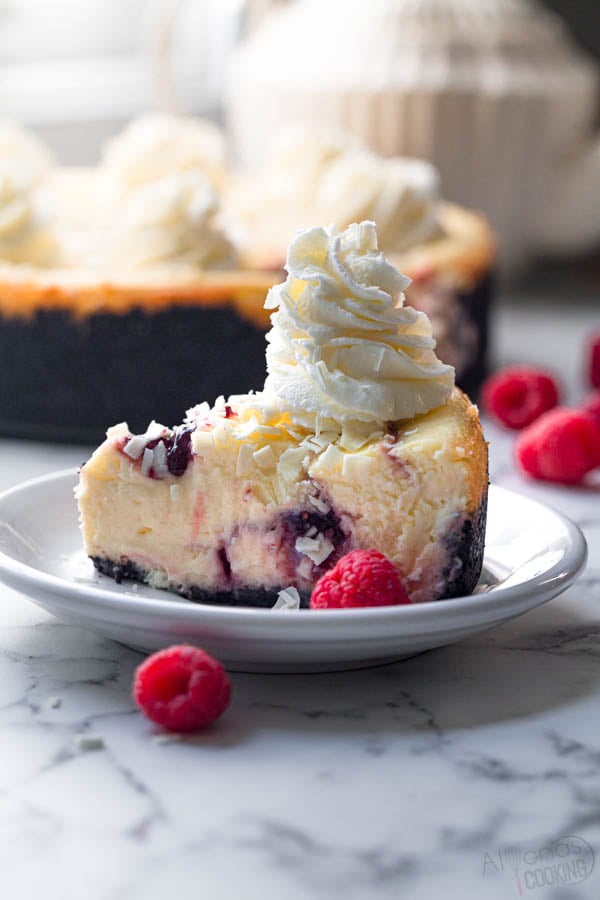 Can you freeze Cheesecake?

The Cheesecake Factory Cheesecakes actually come frozen to the Restaurant locations where employees then serve it to customers. So, it is totally safe to freeze cheesecakes.

How to freeze a cheesecake: completely cool the cheesecake. Wrap sides and top with plastic wrap to prevent frost and freeze covered inside a bag. Garnish with shavings and whipped cream before serving to prevent condensation. Freeze up to 3 months.

Thawing instructions: thaw overnight in the fridge or at room temperature for a few hours.

How to tell if a cheesecake is done?

The best way to tell if a cheesecake is done is to jiggle the cheesecake lightly after the baking time is up. The sides should slightly poof up and when moving the pan the middle shouldn’t be too jiggly. It will still bounce but shouldn’t look too wet.

How to make a raspberry sauce for cheesecake?

To make a homemade raspberry sauce for a cheesecake: bring 10 oz of fresh raspberries, 1/4 cup sugar, and the juice of 1 lemon to a rolling boil. Run through a sieve and cool. Keep refrigerated until serving.

What is the best raspberry product to use for raspberry swirls?

A raspberry jam is made more for a spread, and red raspberry preserves can tolerate some baking without running out as quickly. Raspberry pie filling, on the other hand, is a thickly set filling that is much creamier and is not as heavy as jam or preserves, making it a better and lighter option.

How long will a homemade cheesecake keep in the fridge?

Cheesecakes can keep well in the fridge for up to one week. Anything more should be frozen.

Why did my cheesecake crack?

Cheesecakes can crack from a high oven temperature. They should be baked low and slow since they are a denser dessert. Baking a cheesecake at a high temperature can spring up the cheesecake rapidly causing a shift and cracks. If the cheesecake cracks simply add more melted preserves into the cracks to seal them up.

How to make chocolate shavings?

When your cream cheese batter looks curdled, it’s a sign that it was overbeaten. It won’t get any better in the oven either. It’s very important not to over-mix a cheesecake batter. If you’re tempted to blend it well, beat the cream cheese alone very well then once the other ingredients come in you can’t mix for too long, it can lose its structure and curdle on you. No one wants a curdling looking cheesecake.

How to make the perfect Chocolate Oreo Crust from oreo cookies?

Like my graham cracker crust, I created the perfect melted butter to cookies ratio and believe it or not it’s not the same! I’ve noticed oreo cookies need less melted butter in order to moisten and graham crackers need more. Keep in mind, I do crush my chocolate cookies with the cream white filling so that too can be the reason for less butter.

To make a Chocolate Oreo Crust:

This crust bakes with the cheesecake so there is no need to pre-bake the crust. 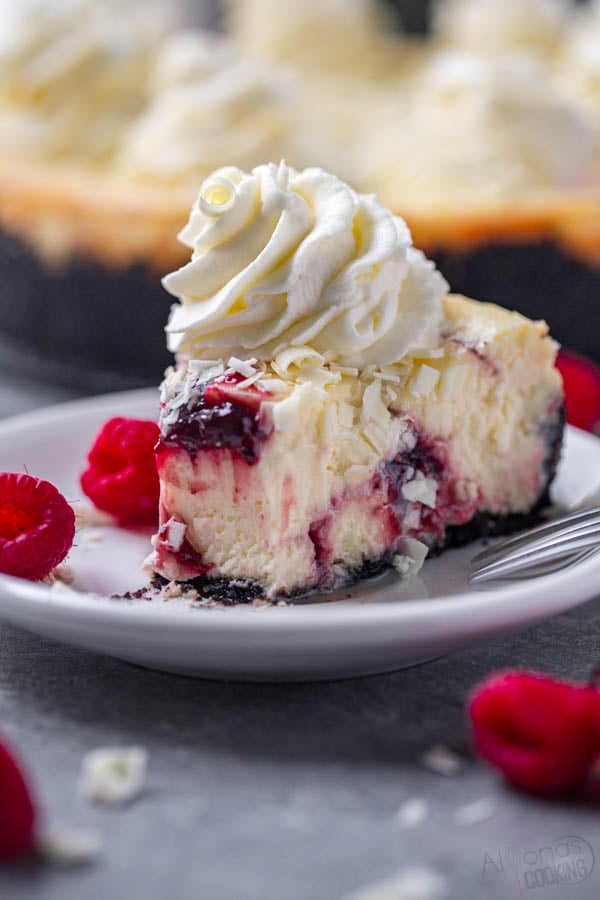 Tips for making the Perfect Cheesecake: 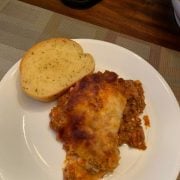 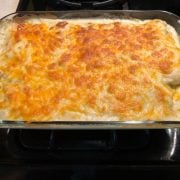 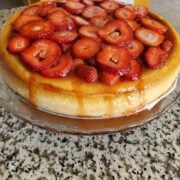 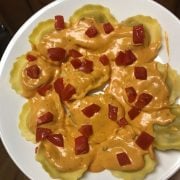