How to make BBQ Sauce to can. This bbq sauce recipe is the best homemade bbq sauce simmered slow on the stove using fresh tomatoes. It’s loaded with black pepper, tangy vinegar, flavorful spices, molasses, and hickory liquid smoke just like our favorite bottle of Texas BBQ sauce! I love to make this recipe for long-term storage and pull out as many as I need throughout the year! 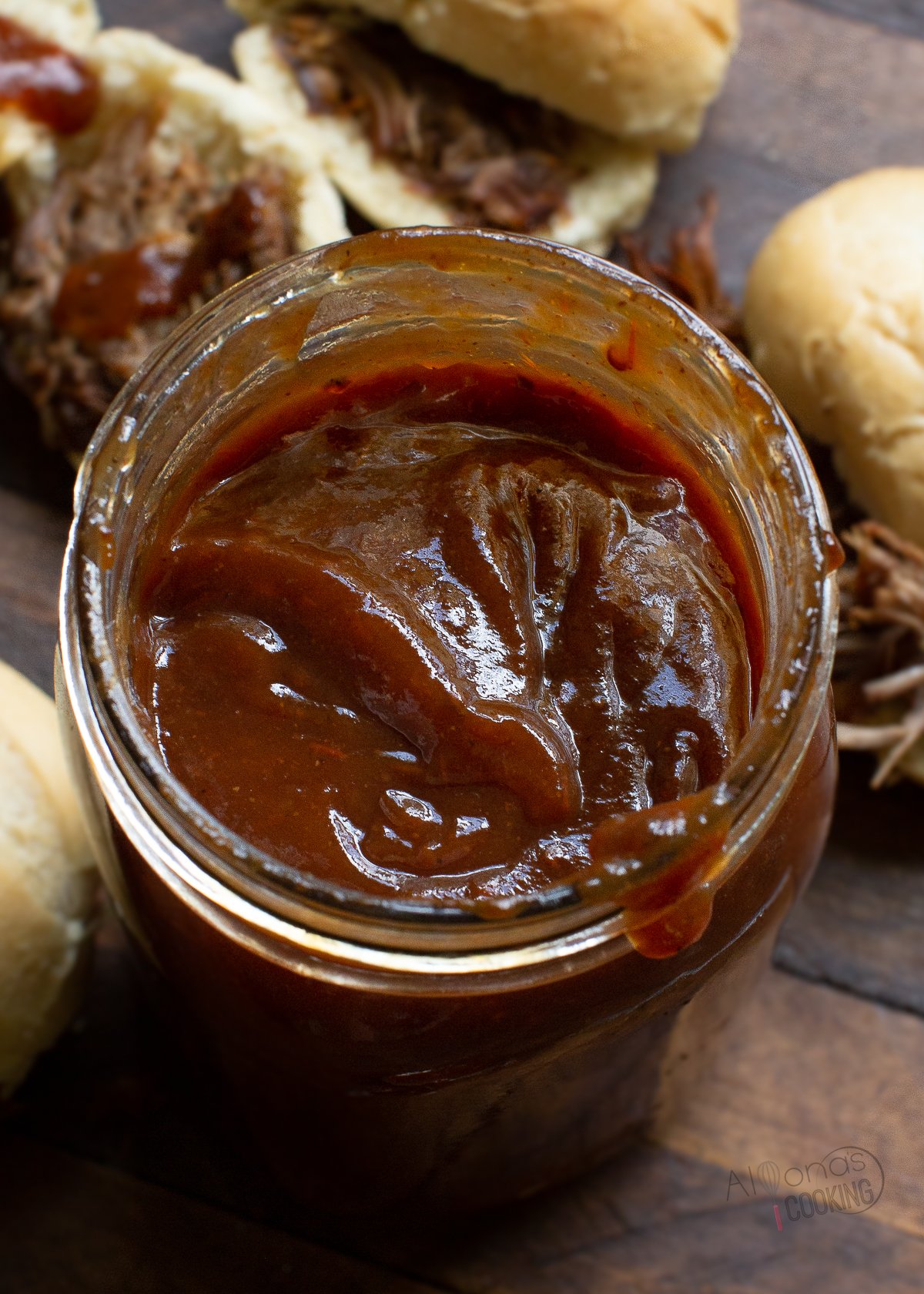 Watch How To Make BBQ Sause:

Barbecue sauce is not only good for basting or marinating meat we love to cook it with our braised pork ribs or top it over pulled chicken sandwiches! It’s so good as a steak sauce or for dipping grilled chicken kabobs. Everyone should have this condiment for their cooking!

This is not your boring bland bbq sauce or white bbq sauce made of mayonnaise. Here in Carolina, we like it peppery, smoky, and tangy! This recipe for bbq sauce was adapted to recreate my favorite bbq sauce brands that I buy at Aldi, like Burman’s Texas-style BBQ sauce. It has got to be one of my favorite bbq sauces and is a spot-on copycat to my favorite bottle of sweet and tangy bbq sauce! I have canned batches of this bbq sauce, and this recipe has been tested over and over again for successful results.

The Best BBQ Sauce Base:

The most flavorful base for a classic bbq sauce is a tomato base. Canned tomato paste shortens the simmering time and sometimes prepared ketchup is used instead since it’s plenty seasoned and sweet and tangy, to begin with. I like to make bbq sauce as a way to use up all my fresh tomatoes and the longer simmering time doesn’t bother me a bit. I simply know how good this sauce turns out to be, so, I will happily stock up my pantry shelves with this homemade goodness.

This is an easy bbq sauce using fresh tomatoes, you just cook the tomatoes until they get mushy then puree them right in the pot with a stick blender, no food mill or blanching required! I like to do this with my ketchup recipe too and it blends into a smooth sauce base! Here is how to make a tomato base using fresh tomatoes; 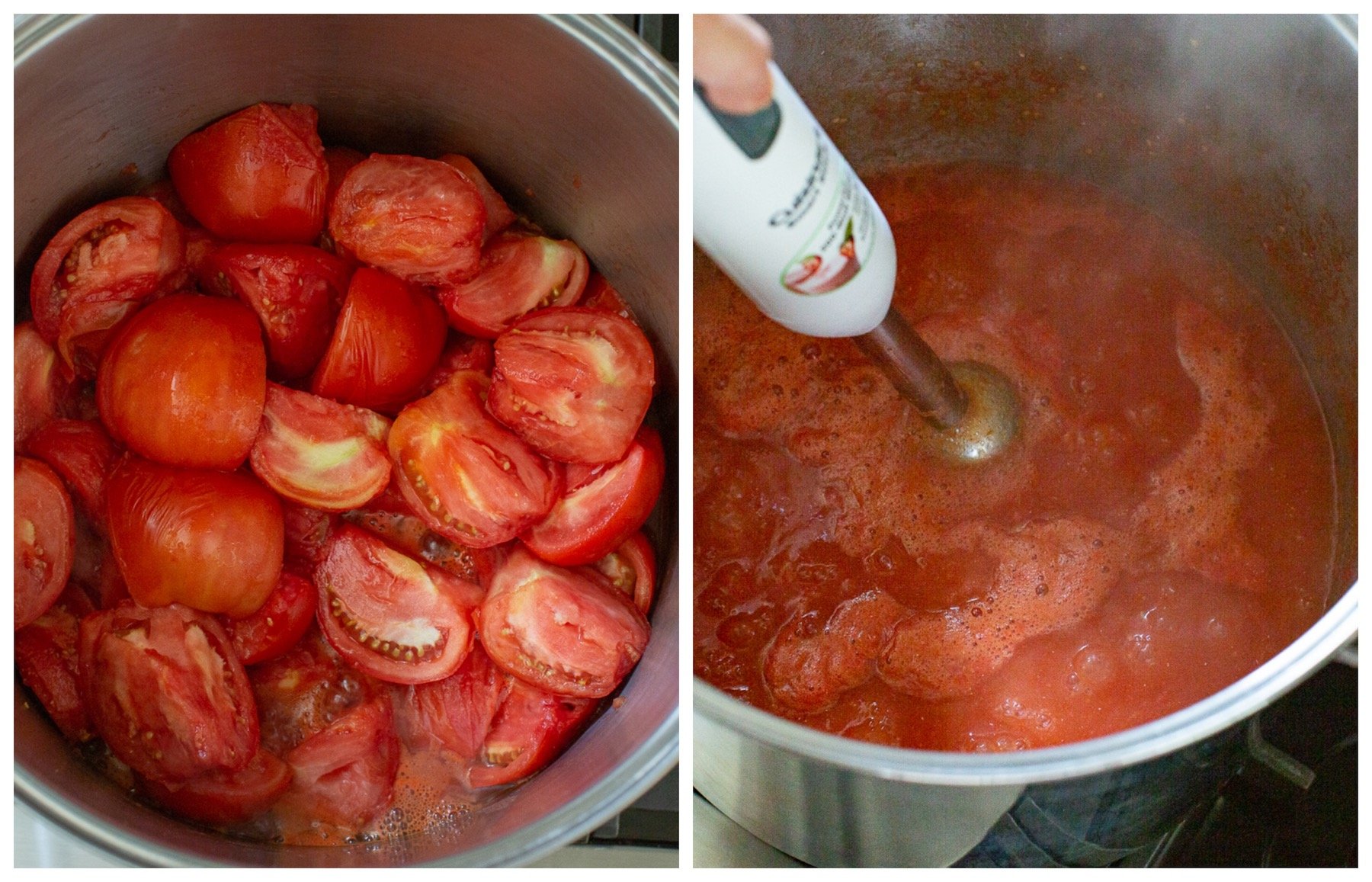 Note: you could run the blended tomatoes through a mesh sieve to discard any seeds or small skins, a food mill is great for this kind of process. However, I think the hand blender helps thicken the base from all its natural pulp.

What is Texas BBQ Sauce?

Frankly, there are many different regions and types of barbecue sauce. Aldi carries Regional-style bbq sauces in the Kansas City flavor, Memphis-style, Carolina-style bbq sauce, and Texas-style. Each is known for its sweet and tangy flavors, however, traditional texas style barbecue sauce is heavier on spices like cumin, chili powder, black pepper, and lots of onion flavor. The consistency is a little on the thin side but it can still sit on top of the meat.

Liquid smoke is a highly concentrated liquid that is condensed from wood to flavor food. It comes in different wood flavorings such as “Mesquite” or “Hickory”. Both have their unique smoky flavor, which I why I like to mix and match. For more of a Sweet Baby Ray’s flavor, add more mesquite or hickory for a Texas-style bbq sauce.

BBQ sauce recipes are mainly vinegar-based. This homemade bbq sauce recipe is ideal for canning although you can easily recalculate it to a smaller portion for refrigeration. Typically, I would use tomato juice from fresh tomatoes, however, you can begin with store-bought tomato juice, tomato sauce, or paste diluted with water as the base. 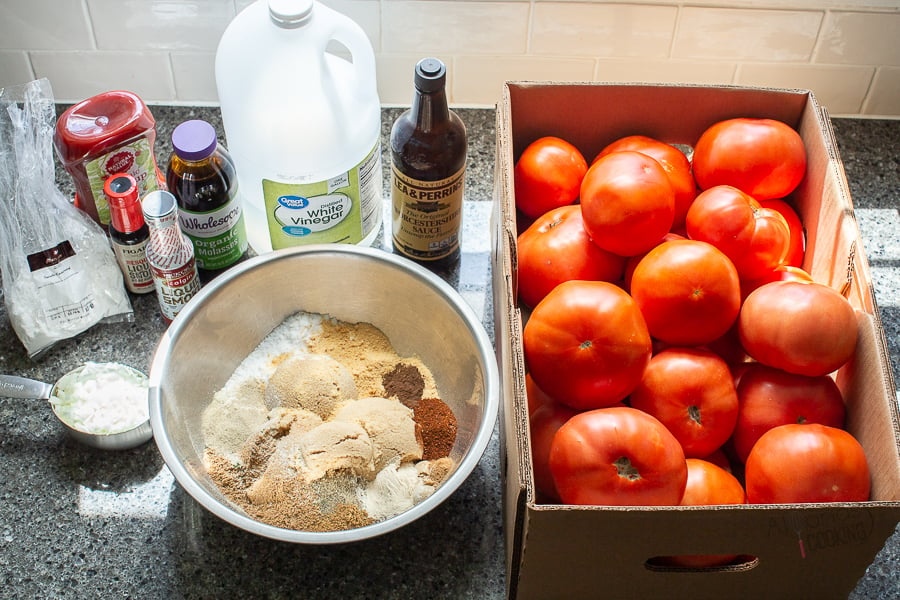 Healthy Barbecue Sauce: make a sugar-free bbq sauce by using a natural sweetener like Xylitol in combination with honey. You could also sweeten with part pineapple juice and honey for the sugar. This homemade bbq sauce is gluten-free and Keto-approved.

How To Make Barbecue Sauce:

It’s easy to make homemade bbq sauce, just making it from scratch can be lengthy from all the simmering time and prep of fresh tomatoes. The overall concept is simple if you don’t mind all the cooking time needed. Growing your own tomatoes and supporting local farms is a great way to source tomatoes and if you are left with too much, bbq sauce freezes well so your options are many if you don’t wish to can.

Note: Be sure to use pure salt with no additives such as kosher salt, pickling salt, or sea salt when making.

I know, you may be thinking this does not sound like an easy bbq sauce, but I tell you canning is not so bad. I have been canning for years and invested in super helpful equipment that makes canning even easier. You don’t have to buy expensive equipment to make bbq sauce, use your biggest pot to slow simmer the sauce, and canning jars can be found at Walmart or even the Dollar store sometimes. Here is everything you will need to make bbq sauce at home if you plan to cook batches of homemade foods, time and again.

Barbecue sauce can be canned, refrigerated, or frozen. Canning bbq sauce is a long-term option to consider if you want to prolong the storage time without the need of taking up your freezer space or going bad. Although some homemade sauces keep well refrigerated for several months it’s best to freeze them or can them to prolong the shelf life.

To test if your canning seal has formed, you will want to push down on the center of the lid after 24 hours. If the lid pops up and down it has not been sealed. Any kind of clicking sound is a sign the air was not vacuumed shut by the water bath process. In this case, you will need to refrigerate the bbq sauce or place the jar in the freezer. Barbecue sauce is good for several months in the fridge and if you keep it in the freezer it will last for up to 6 months or more.

Tip: if freezing bbq sauce in a glass jar make sure you leave headspace for room to expand (water or liquid can expand during freezing.)

Ways To Use BBQ Sauce:

What is BBQ Sauce Made of?

Barbecue sauce is a condiment perfect for grilling or simmering. Its main ingredients are vinegar, tomatoes as the base (sometimes ketchup), liquid smoke, spices, and sweeteners like molasses, and sugar. Generally, a good bbq sauce is well seasoned with black pepper and ground mustard. Sometimes yellow prepared mustard is used to make Carolina-style bbq sauce. It’s mainly used for basting meat, cooking with ribs, or as a marinade for grilling.

The only thickener I use in condiments like bbq sauce or ketchup is Thermflo. Thermflo is a canning starch perfect for canning or even freezing! It is gluten-free and derived from waxy maize (corn).

What is a Water Bath?

A water bath in canning is when you heat a pot with water and jars to boiling point. Simply fill glass jars to the headspace and loosely cover with lids (don’t seal shut or else lids can bulge). Then place into a boiling water canner or large pot. Pour enough warm water to cover at least up to half, quart-sized jars. Bring this to a boil and time the water bath process from the time it boils. Once the jars are removed from the water, tightly seal each jar shut and allow to cool at least 24 hours before checking if they are sealed.

Is it Necessary to Sterilize jars before Canning?

Need more sauce recipes to enhance your cooking? Most of these sauces are good to dip food in cold or cook with. For another sweet and savory sauce try our Asian-style Eel sauce which is a sticky sauce packed with umami flavor! 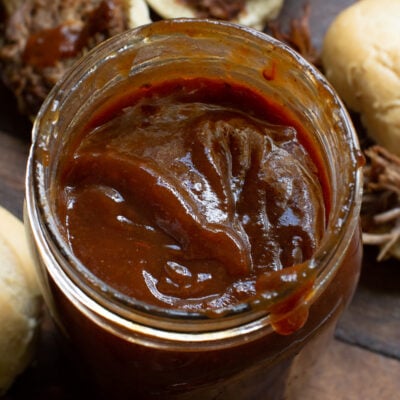 Prep Time: 1 hour 30 minutes
Cook Time: 2 hours
Total Time: 3 hours 30 minutes
Servings: 10 quarts
Author: Alyona Demyanchuk
How to make BBQ Sauce to can. This bbq sauce recipe is the best homemade bbq sauce simmered slow on the stove. It's loaded with black pepper, tangy vinegar, fresh tomatoes, spices, molasses, and hickory liquid smoke just like our favorite bottle of Texas BBQ sauce! I love to make this recipe for long-term storage and pull out as many as I need throughout the year! The best bbq sauce is homemade! 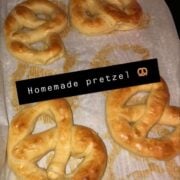 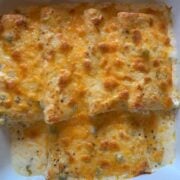